About the Wimmera Catchment

The Wimmera region covers approximately 10% of Victoria and is the fifth largest catchment management region in Victoria, encompassing 2.3 million hectares. 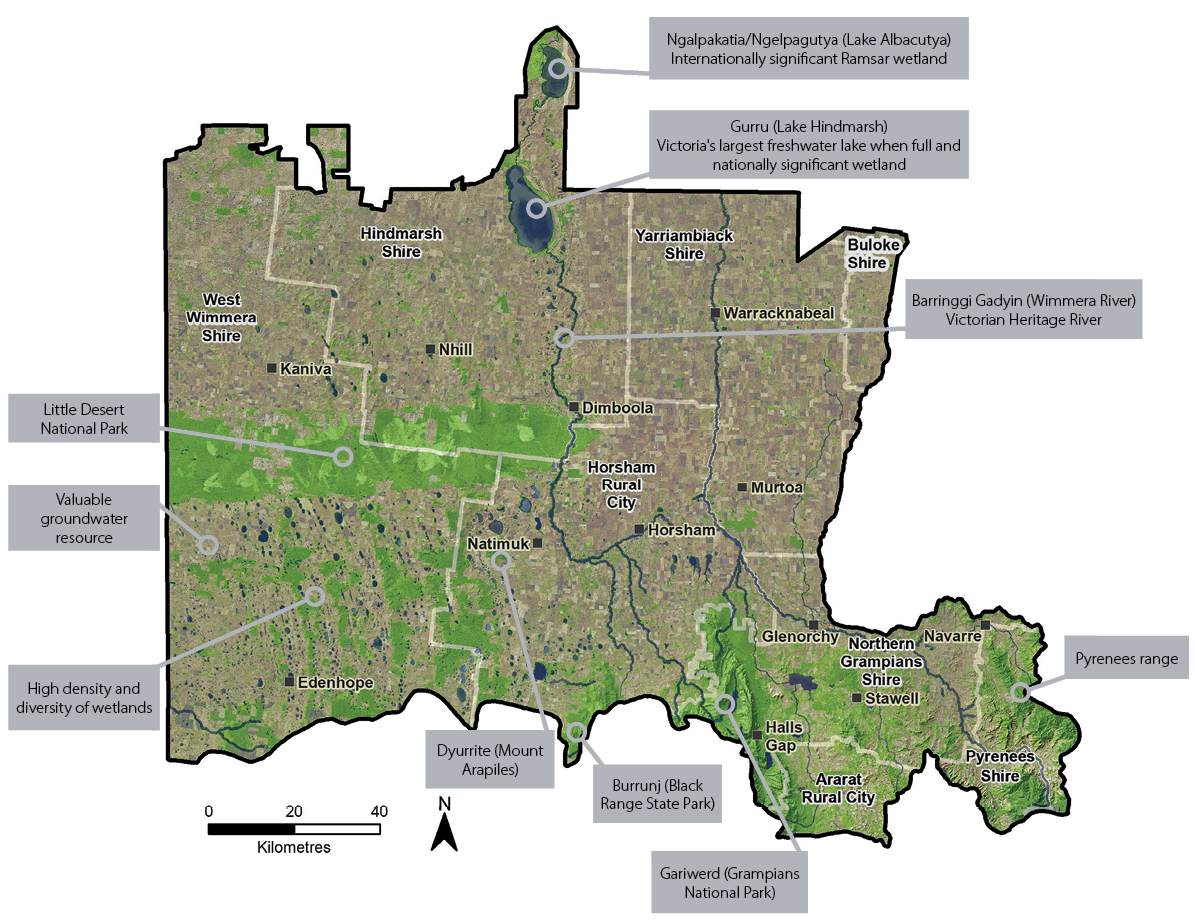 The Wimmera’s waterways are oases in a relatively dry landscape. Major catchments include the Wimmera Basin and the eastern part of the Millicent Coast Basin. The Barringgi Gadyin (Wimmera River) is the largest Victorian river that does not flow to the sea, instead flowing to Victoria’s largest freshwater wetland, Gurru (Lake Hindmarsh), then into Ramsar listed Ngalpakatia/Ngelpagutya (Lake Albacutya) and beyond. Ramsar refers to the Convention of Wetlands of International Importance.

The Wimmera contains 25% of Victoria’s wetlands which are predominantly in the south west of the region. This area also contains a valuable groundwater resource, supporting a significant irrigation and grazing industry.

The Pyrenees Range, Gariwerd (Grampians National Park), Burrunj (Black Range State Park) and Dyurrite (Mt Arapiles) are predominant in the landscape. These reserves, along with the Little Desert National Park, are the largest in the region and are significant areas for biodiversity and recreation. Along with the many small and medium bush and wetland reserves scattered throughout the region, they support regional liveability, health and wellbeing, and environmental, socio- economic and cultural values. Gariwerd (Grampians National Park) alone attracts approximately one million people per year and is the second most popular national park in Victoria

The Wimmera’s population is approximately 50,000 with around one third of residents living on farms or in small townships with less than 2,000 people.

Health and wellbeing are influenced by a range of catchment management factors including the health of the local environment, access to recreational opportunities and connection with the community. The overall health status for the Wimmera community is poorer than the state average in many indicators. This is more pronounced in children and young people.

Wimmera Primary Care Partnership’s 2020 population health and wellbeing profile recognises there is a positive relationship between visits to green space and a range of health benefits. Residents of the Wimmera visited green space less than the state average. Despite this, residents in the Wimmera are more likely to attend community events and the meetings or social events of local clubs and groups than the state average.(3) Regional Landcare leaders have reported that volunteer numbers are generally steady overall but patchy and fluctuating at a local level. Some groups have increased volunteers while others have decreased indicating that the trends for Landcare may be different to other activities.

The five Local Areas in the Wimmera Regional Catchment Strategy focus on distinct parts of the region and explain how the themes come together and integrate in each place. The Local Areas are based around local government and catchment boundaries. This recognises the importance of local community ownership, participation and management and demonstrates integrated catchment management.
The Local Areas in this strategy are:

Climate change will continue to shape the region. Many predicted consequences under various greenhouse gas emission scenarios have already been experienced. For example, the Bureau of Meteorology and Commonwealth Scientific and Industrial Research Organisation have observed that in the Wimmera in the last 30 years:

Prior to colonisation the Wimmera landscape was healthy and provided sustenance for the people and wildlife that lived here. With European settlement came foreign plants and animals and changed management practices which impacted the land and the people. First Nations people were forced out of the landscape and could not maintain their obligations to Country. The First Peoples Assembly of Victoria and the Victorian Government have made a shared commitment to truth telling through the Yoo-rrook Justice Commission. The Commission is expected to establish an official record of the impact of colonisation on First Peoples in Victoria and make recommendations about practical actions and reforms needed. This will guide integrated catchment management actions in the Wimmera into the future.

As most land in the region is privately owned and managed it is vital to support landholders so they can continue to contribute to improving the environment for the benefit of the whole community.

A survey of rural landholders found that the top three property related issues for landholders are:

The top three district issues for landholders are:

The Wimmera’s mining history has largely been focused on gold mining in the Upper Catchment which stretches back to 1850s. More recently the Wimmera has been recognised as a world priority area for mineral sands mining with several significant ventures in the early stages of development. It will be important to ensure that any mining development appropriately meets environmental, social and governance expectations. Specific consideration should be given to agricultural food production, tourism, public amenity and water availability.

The illegal dumping of waste can impact on waterways and groundwater, contaminate soils and impact on wildlife and human health. Relevant agencies and the community need to be vigilant in observing, reporting and responding to illegal waste dumping.